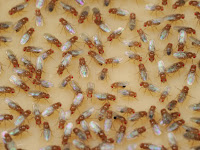 In the summer I met Mike Regnier, a science writer at the Wellcome Trust who had come to visit Manchester University and learn about our lab's work. He was a very friendly and interesting guy, as well as a science writer, he is also an occasional playwright.  He has now written an article which gives a good discussion of the research of Andreas Prokop's lab, in which I have worked over the last four years. He writes about why we choose to study nervous system formation in fruit flies, when studies can now be carried out in species much more closely related to ourselves, such as mice. As well talking specifically about our lab's work, he also gives a very nice general introduction to fruit fly research. So if you are interested in why fruit flies began to be used in the lab over a 100 years ago, the ways in which such studies have informed our understanding of human biology up to the present day, or how we practically go about using these tiny flies, then I highly recommend taking a look at this article.
Posted by Robin Beaven at 05:07 1 comment:


I will shortly be starting a research position in the lab of Hiro Ohkura, up in Endinburgh. Below is a movie from the Ohkura lab website about their work to understand the machinery which seperates chromosomes during meiosis; the process in which egg and sperm cells, with the correct gene content, are generated. 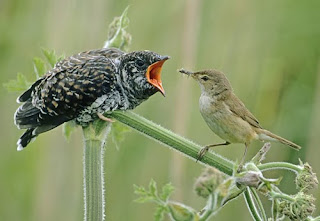 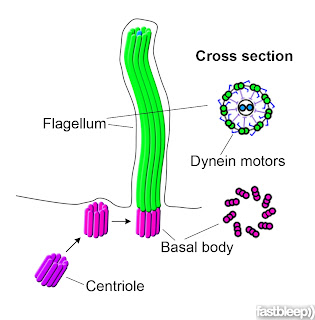 If you are interested, please take a look at my article about microtubules. These cellular structures are needed for processes as diverse as growth of your nerves, division of your cells, and (if you are a chap) the swimming of your sperm.

In my research I investigate how microtubules drive the growth of nerve cells, and how the behaviour of microtubules is controlled in this process (I touched on this in my last blog post: A neuronal growth cone sets out on its journey).

My article is for the newly launched Fastbleep Biology Notes website; it aims to provide clear, engaging articles written by students, to help other students.

A neuronal growth cone sets out on its journey 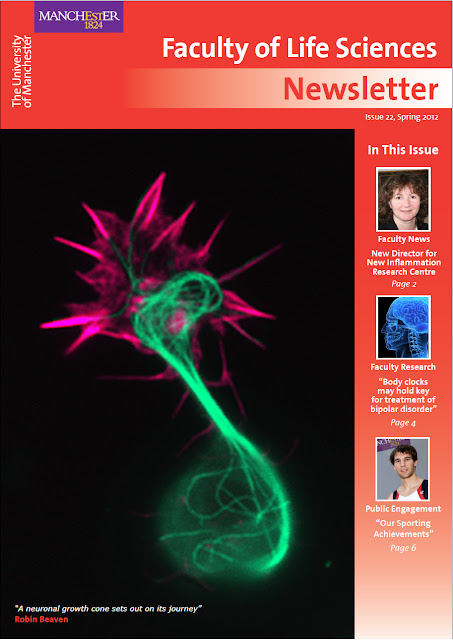 
I wanted to show my photo - “A neuronal growth cone sets out on its journey” - which is appearing on the cover of our Faculty of Life Sciences newsletter. It is of a nerve cell taken from a fruit fly (Drosophila melanogaster) embryo and grown on a glass cover slip for easy visualisation. The cell body is at the bottom, with an axon growing from it and ending in the growth cone (top). 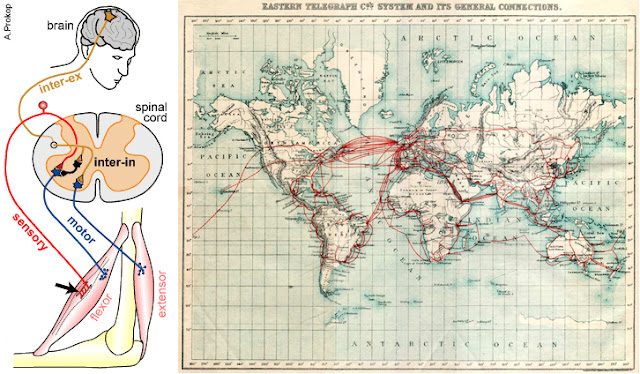 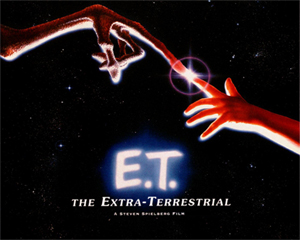 It is intriguing to consider the consequence that shaking hands with an alien could have, whether this was from a literal, E.T.-esque encounter, or perhaps more plausibly, from a metaphorical ‘handshake’, for example if we discovered alien microbes on mars and studied them in the laboritory back on earth. It is even more intriguing to imagine what such encounters could teach us about the fundamental principles of life. However could they also pose a risk to life on earth? I am not referring to a War of the Worlds style alien invasion, but for example could an extra terrestrial virus, inadvertently released, go on to parasitize our cells? Could such a life form even swap genes with our planet’s organisms, dramatically altering the course of evolution on earth?  These possibilities may be rather far fetched, but perhaps they are not entirely implausible.
The earth is home to an incredible diversity of life, perhaps 100 million species, broadly divisible into three domains; the Eukaryotes (everything from amoeba to blue whales), Bacteria, and Archaea (superficially similar to Bacteria but perhaps evolutionarily closer to Eukaryotes). In a sense, however, the earth only possesses one form of life. That is, all species seem to descend from a single common ancestor, and all share the same basic molecular machinery.
Read more »
Posted by Robin Beaven at 03:55 No comments:

I want to talk about something that runs as a thread through our history, and is currently growing very strong, yet is often overlooked. It is the part that amateurs play in science – here I will focus on biology. I would argue that this phenomenon is of great value, the ripples of which spread beyond the immediate work done by amateurs, carrying an understanding of and engagement with science far beyond what professional scientists alone could achieve. This is important - science after all is an endeavour in which we are all stakeholders, we contribute to it with our taxes and ultimately its advances impact upon our lives.

Amateur science has come in many forms, from the fashion for amateur science amongst the Victorians, to the boom in so-called citizen science of the last few decades, fuelled and enabled by the internet. Many amateur science projects make use of the power that large numbers of enthusiastic volunteers can bring, to collectively achieve tasks that would be too time consuming for professionals alone. At the same time there are many amateur scientists with a great deal of experience in a particular area, sharing much of the specialist knowledge of professional scientists. Indeed some important biological advances were made by amateurs.

One great example is Gregor Mendel, considered the father of genetics. He was a monk, albeit one in a somewhat unusual monastery. It was headed by Cyrill Napp, who himself was involved in science, and at the time the monks’ duties included teaching mathematics at the Philosophical Institute of Brüun (now Brno) in Moravia. Mendel had attended the Philosophical Institute in Olomouc but could not afford to continue to University. It was this that led him to his life as a monk, however he did not take well too it, reportedly being too shy to deal with the parishioners. Abbot Napp had him sent to teach Greek and mathematics to children, which Mendel took too well, however he repeatedly failed the tests to become an accredited teacher, and eventually returned to the monastery. Here he was allowed to carry out experiments that turned at last to those using the garden pea, which would make Mendel famous. Abbot Napp even had a new greenhouse built for Mendel’s work.