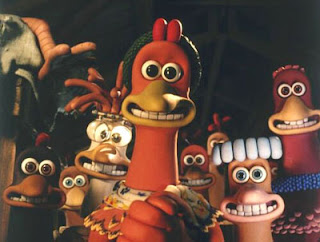 What is wrong in this picture? Clearly it is the chickens' endearing Wallace style grins. No living bird possesses teeth and the youngest toothed fossil birds are the diving bird Hesperornis regalis and the flying bird Ichthyornis dispar which lived about 80 million years ago.

In 1980 the (now late) evolutionary biologist Stephen Jay Gould published Hen's Teeth and Horse's Toes, a collection of essays which explores biological adaptations and their relevance to evolutionary theory. It includes one essay of the same name which discusses a phenomenon termed atavism – the reappearance of lost ancestral traits. One example given is that of the occasional appearance of additional horse toes, resembling those of the horse like creatures in the fossil record. The other part of the essay discusses an experiment which was very recent at the time, suggesting that hens could still possess the ability to form teeth.

During embryonic development, a tissue called the ectoderm forms which (among other things) gives rise to skin. In some places it contacts specific types of another tissue – the mesenchyme. Molecular signals pass between the two tissues which induce the ectoderm to grow into a specific structure dependent on the type of mesenchyme. In this manner, molar mesenchyme induces the ectoderm to develop into a tooth.

In the experiment discussed by Gould, tooth mesenchyme from a mouse and ectoderm from a chick were removed and grown together. Neither of these alone can form teeth, but when combined, tooth like structures were formed. This suggested that during the evolution of birds the inductive signal from the mesenchyme was lost in one way or another, but that the developmental programme for tooth formation remained, in an inactive state. This experiment has remained controversial ever since. Could, for example, the mouse mesenchyme been contaminated with mouse ectoderm, and the chick ectoderm played no part in the tooth formation observed? We will never know for sure, but thankfully biological science has progressed rapidly in the last few decades, shedding light on the issue of hen’s teeth.

A type of cells called the neural crest migrate through the developing embryo and contribute to the development of many structures, with a subset forming the tooth mesenchyme. In one experiment neural crest cells from mice were used to replace those of chicks, which then continued to develop. These cells migrated into the chicks jaw and tooth precursor structures formed. In this case contamination with mouse ectoderm is unlikely to be a problem, as the neural crest cells were allowed to migrate along their specific route, and other cell types would be unlikely to do this.

In another study researches showed that a number of molecules involved in tooth development are not switched on in the developing chick jaw. Artificially adding one of these - a signalling molecule named BMP4 - again set in motion the formation of teeth precursors. This is strong support for the notion that what is missing in birds are the initial molecular signals to induce tooth formation.

More recently it was found that chicks with two copies of a mutation named talpid2 grew tooth precursors. The mutation causes the chicks to die before they have even hatched, but thankfully they reach a stage where the precursor teeth have appeared.

This finding is intriguing, as in this case nothing new has been introduced into the chick. The gene effected by this mutation, and the molecular basis of the reactivated tooth development are not yet known, but it is likely that the mutation results in the inactivation of a gene. A number of explanations could explain this finding, for example a gene could act to suppress initiation of tooth development in birds, and this gene could be lost in talpid2 mutants. Alternatively the effect could be indirect, for example in birds the potential tooth mesenchyme may exist, but never makes contact with the ectoderm. In this case could talpid2 cause tissue rearrangements, bringing them back into contact? This study raised the possibility that birds could re-evolve teeth.

Unfortunately evidence now suggests that this is an impossibility. If the tooth precursors described in the chick experiments were to develop further they would lay down a rigid core of dentin, coated with hard enamel. By searching in the chicken genome for four genes involved in dentin and enamel production, scientists demonstrated that all four were either absent, or had gained mutations which would render them useless. Of course the very presence of corrupted tooth specific genes is further evidence of evolution of birds from a toothed ancestor.

Bird’s inability to regain teeth is consistent with Dollo’s law of irreversibility, proposed in 1893. This is the ideas that evolution is a strictly one way process, and so once lost a structure cannot be regained in its original form. We now know that genes acquire mutations over time, and that any gene no longer used by an organism will rapidly gain mutations that are not selected against, rendering it useless. In light of this, the ability of birds to even grow tooth precursors seems surprising. The reason may be that many genes involved in early tooth formation are, for example, signalling molecules involved in the development of many other structures, which have therefore been well preserved. This exposes a loophole in Dollo’s law.


So a recent study has shown that the frog Gastrotheca guentheri has regained functional teeth on their lower jaw after more than 200 million years of absence. This is made possible by the retention in frogs, of upper jaw teeth. All of the genes involved in tooth formation have therefore been well preserved, allowing lower jaw teeth to be reacquired. Birds may never regain functional teeth, but then we do not expect the atavistic legs occasionally found in whales to ever allow them to walk out of the sea. That is not really why these phenomena are of such interest.

In 1856, two years after On the Origin of Species was published, the first Archaeopteryx fossil was discovered. This toothed fossil appeared to be a dinosaur in many respects, yet the impressions left by feathers were clear. In 1880 Darwin described the newly discovered Hesperornis and Ichthyornis fossils as “the best support for the theory of evolution”. These much younger fossils were essentially modern birds, yet still retained teeth. So they added huge support, specifically for the evolution of birds from toothed dinosaurs, but also generally for what Darwin termed “descent with modification” which lies at the heart of the concept of evolution. 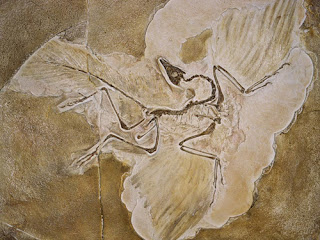 So in 1980, Gould jumped on this evidence that tooth formation ability had not been entirely erased during 80 million years of bird evolution. Further insights have confirmed this finding, and it provides one of many strands of evidence linking birds back through close relatives of Ichthyornis and Archaeopteryx to dinosaurs.